Home of the Red Raiders 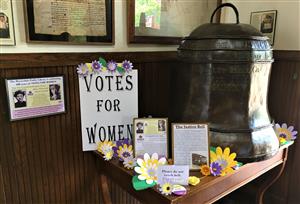 MEYERSDALE - In the months prior to the closing of school due to the COVID-19 pandemic in early 2020, several Meyersdale Area High School and Middle School students joined a local movement to celebrate women of the past and the impact they have made on women in the present and future.

The Meyersdale Area Public Library uncovered the role Somerset County women had in the advancement of the rights of women during the earliest days of the 20th century. As the 100th anniversary of the August 1920 ratification of the 19th Amendment to the U.S. Constitution approached, staff and volunteers planned a variety of activities to celebrate this important milestone. While these plans were cancelled due to the pandemic, the work of our students cannot and should not be ignored, as they worked diligently to celebrate the work of those special activists.

Mrs. Jennifer Baer Hurl, library archivist, met with Mrs. Jo Bolden, Art teacher at MASD to invite MASD students to join their efforts to celebrate this centennial celebration. She provided students with information on the efforts of Somerset County women during the suffragist movement and details of how they could join the celebration. Students helped create flowers in the colors of the suffragist movement, yellow, white and lavender. Students also helped make posters and signs for display in town.

A small group of teen girls  agreed to tackle a special project - a paper-mache replica of The Justice Bell. The Justice Bell was a symbol of the women’s suffragist movement created by activist Katharine Wentworth Ruschenberger in 1915.  Members of the Pennsylvania Woman Suffrage Association traveled to the Meneely Bell Company in Troy, New York, to kick off the casting of the 2000-lb. bronze replica. The words Establish Justice were engraved on the bell and its clapper was chained to its side, not to be rung until women were able to vote. For months, the bell was transported across the state on a truck to parades and rallies. After passage of the 19th Amendment to the U.S. Constitution that gave all the nation’s women the right to vote, the Justice Bell was finally rung in a huge celebration at Independence Square in Philadelphia.

According to Hurl, the bell was in Somerset County between July 30th and August 2nd when it toured the state of Pennsylvania during the summer of 1915. The Justice Bell was, for a time, parked in front of the Slicer Hotel, where the post office is now located.

Students, Jaylynn, Katie, Anna and Maria, spent several afternoons working on a replica of the Justice Bell that was to be featured in the Pennsylvania Maple Festival Parade. When those plans were cancelled, the Meyersdale Area Historical Society graciously offered to house this impressive project. After several months at the restored train station, the bell, like the original, will be on the move again! The Somerset County Commissioners have offered to display the bell at the Somerset County Courthouse throughout the fall and winter months.

"The staff of the Somerset County Courthouse is anxiously awaiting the arrival of the replica of the Women's Suffrage Justice Bell! It is exciting to celebrate the 100th anniversary of the ratification of the 19th Amendment here in the Courthouse. Plans are in the works to transport the Bell to the Courthouse." Somerset County Register of Wills Sharon Ackerman explained.

These special young ladies are excited that their own bell will be on display in such a prominent location. They said, after hearing of the dedication and commitment of area women, including Alice Paisley and Flora Snyder Black, they too wanted to make a difference in America’s County.

Hartman’s portrait of Black will also be on display at the Somerset County Courthouse. Black was the first president of the local suffragist group and was among those who traveled with the Justice Bell in 1915. Black was an enthusiastic and determined advocate of women’s rights in this area and also championed several other organizations dedicated to history and genealogy.

Hartman said she is excited at the prospect of her work being on display and proud to have played a role in honoring the women who made such an impact on this region. She also enjoyed the challenge of this project and the ipporunityt o experiment with different styles and mediums in art.

“The medium I used was fine line sharpies, regular sharpies and paper with a printed parchment paper design. Almost the entire piece was created using a cross hatching technique, and it was very hard to not rush through the repetitive process,” she explained. “The people I met through the project were very nice and I enjoyed working with them.”

While the plans for their work may have been cancelled and changed, the lessons these special students learned are as important today as the women they honored from 100 years ago.

“Local and state suffrage movement leader Alice Kiernan believed women should be free to become anything they wanted. She boldly noted this during a 1913 suffragist meeting right here in Meyersdale. Among the professions she named were teacher, doctor and mayor, along with artist and even president. What progressive thinking for her time! That was over a century ago, and young girls still need to hear this message,” Baer Hurl explained. “I can’t express how happy it makes me to see our local students – artists in their own right – participating in this project aimed at celebrating Alice, Flora and all of our other Somerset County suffragists. I’m certain these women inspired the young girls of their time, and now, as we mark this centennial celebration, they are still doing so. It’s our job, here in 2020, to ensure Alice’s message to girls and women about the importance of expressing themselves, be it through the electoral process or otherwise, and working to achieve their dreams continues to be heard. What a privilege it is for our Meyersdale Public Library, aided by such dedicated young people from our community, to be serving as a voice for these remarkable women from our past!”

For more information on this project, please contact Hurl at 814.634.0512 or via email  at jhurl@meyersdalelibrary.org.